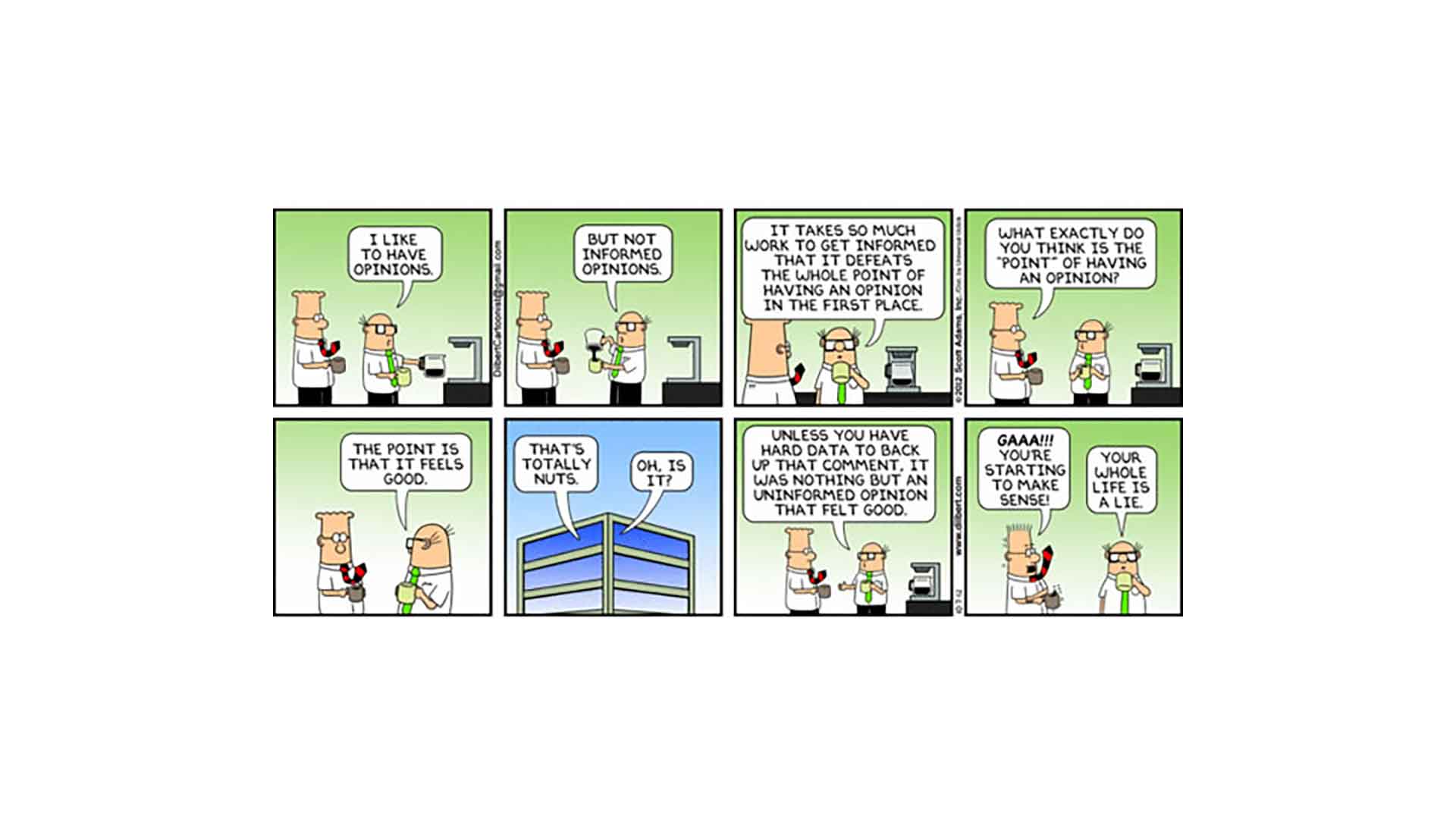 Your Beliefs Do Not Matter

I frequently have debates with people on the subject of the manmade systems we have built and popularized that make no sense at all, confirming in all too many cases that common sense is in actuality complete and utter nonsense sold to greater-fools.

In those exchanges, I rely on reason to connect the dots of knowable truth, understanding full well that any truth is a mere proxy of understanding begging to be further explored. How reality is explored and validated is a subject I can say a lot about, I have focused on it for the last ten years.

The expansion of the fractal of human ingenuity, from the tests of contention aiming to challenge our best proxies of truths, allows our species to continually adapt to a dynamic equilibrium with nature upon which the survival of humanity depends.

Ergo, debates can be of great importance when they seek to explore a higher-normalization of truth, displacing the foregone conclusions held hostage by the past.

Inevitably, when debates become contentious, the opposing side, usually at the end of the rope of their ability to reason, will suddenly inflate the irrefutable life raft of solipsism.

As became apparent when a person in finance was portraying to save the world with sustainability, using the financial strategies of ESG and the like. I could hardly brace myself to interject:

You cannot save the world with sustainability, for sustainability is incompatible with evolution. Nothing in our universe is sustainable. So, building financial strategies incompatible with how assets evolve is not too bright. It is high time the world of finance is led by evolutionary biology to understand how nature rules, to which we must simply subjugate in order to save, not the world, but humans from ourselves

And the response was:

I don’t believe sustainability and evolution are incompatible at all. Quite the opposite. Evolution – physical, social, moral and ethical – is at the very core of my views on how sustainability is achieved.

That is an amazingly solipsistic response. To think that what a person believes, without providing any jump-off point from an existing proxy of tested truth, must, therefore, become the all-encompassing and unchallenging thesis that redefines and dominates us all.

The answer struck a chord because this kind of unquestionable belief, omnipresent in the sale and proliferation of manmade hallucinations, is precisely what does not save “the world” but kills it.

That’s precisely the problem with humanity, belief is the death of reason. Study the universe, or learn from those who have, and the facts are there. My or your beliefs do not matter, how nature rules matters. Evolution does not care about our beliefs, we must begin to believe in nature for humans to prolong our life on earth with financial systems compatible with nature’s law, not with manmade beliefs that prevent us from continually exploring the fractal of human expansion vying for a dynamic equilibrium with nature.

Beliefs are like feelings, incontestable, and true to the person who utters or feels them. Indeed, they are extremely relevant and vital to gauge the propensity for a person to adapt to new realities.

But neither a belief or a feeling, inducing the journey to move from one comprehension of truth to another, contributes to the essence and validity of truth — for the truth is not defined by us. A belief or a feeling is merely a recognition of the personal investment we endure to submit to a new and better truth.

While you can have empathy for the journey of truth a person endures to move from one position of truth to another, one should have no empathy for those unwilling to incur the cost of change holding on to a foregone conclusion, or to those who desire to move to an improbable truth.

One should also not blindly adopt someone else’s belief or feeling, as their starting point, purview, and pace of change will differ. Beliefs are to each his own. Truth, on the other hand, is universal (evolving in exposure).

Many people sell their beliefs as truth, especially to those who have renounced reason.

“To argue with a man who has renounced the use and authority of reason, is like administering medicine to the dead.” — Thomas Paine

For the interest of enslaving others or chasing the self-aggrandizing vile-maxims of short, the two prevalent outcomes from the moronic systems we built that determine what can be discovered, are considered more valuable than the interest in the long of our collective interest in and to humanity.

Humanity breaks down – for real – when an amalgam of popular beliefs infused with a cacophony of feelings confounding consequence with cause are allowed to define the operating-systems of humanity.

As in 42% of asset managers now submitting to the oxymoron of sustainability. Meaning, a financial system eleven times the size of production, is currently engaging in and promulgating evolutionary make-believe to artificially redirect the expanding fractal of human ingenuity infused in production.

Manufactured consent, by financiers with no knowledge of evolutionary biology, physics, or cosmology, instituted to incrementally expose the pertinent rules of evolution, is now steering the exploration and exploitation of human ingenuity away from human compatibility and adaptability to nature upon which we depend.

This consent is causing an accelerated anthropogenic cascade we must take extremely serious. I, for one, cannot let this grave human idiocracy come to pass.

So, to wrap up, your feelings and beliefs are essential to you but remain irrelevant to the common good — for they are irrelevant to nature. They are only relevant in determining whether you can concede to recognize and comply with the evolutionary truth that will enhance your and humanity’s adaptability to nature.

And only when you are willing and able to check your beliefs and feelings at the door and have the chutzpah to discover new truths laid at your feet by nature, should you be appointed to change the evolving thesis of truth in the operating-systems of humanity.

Nature will survive, the question is, is humanity prepared to learn from what it tells us?