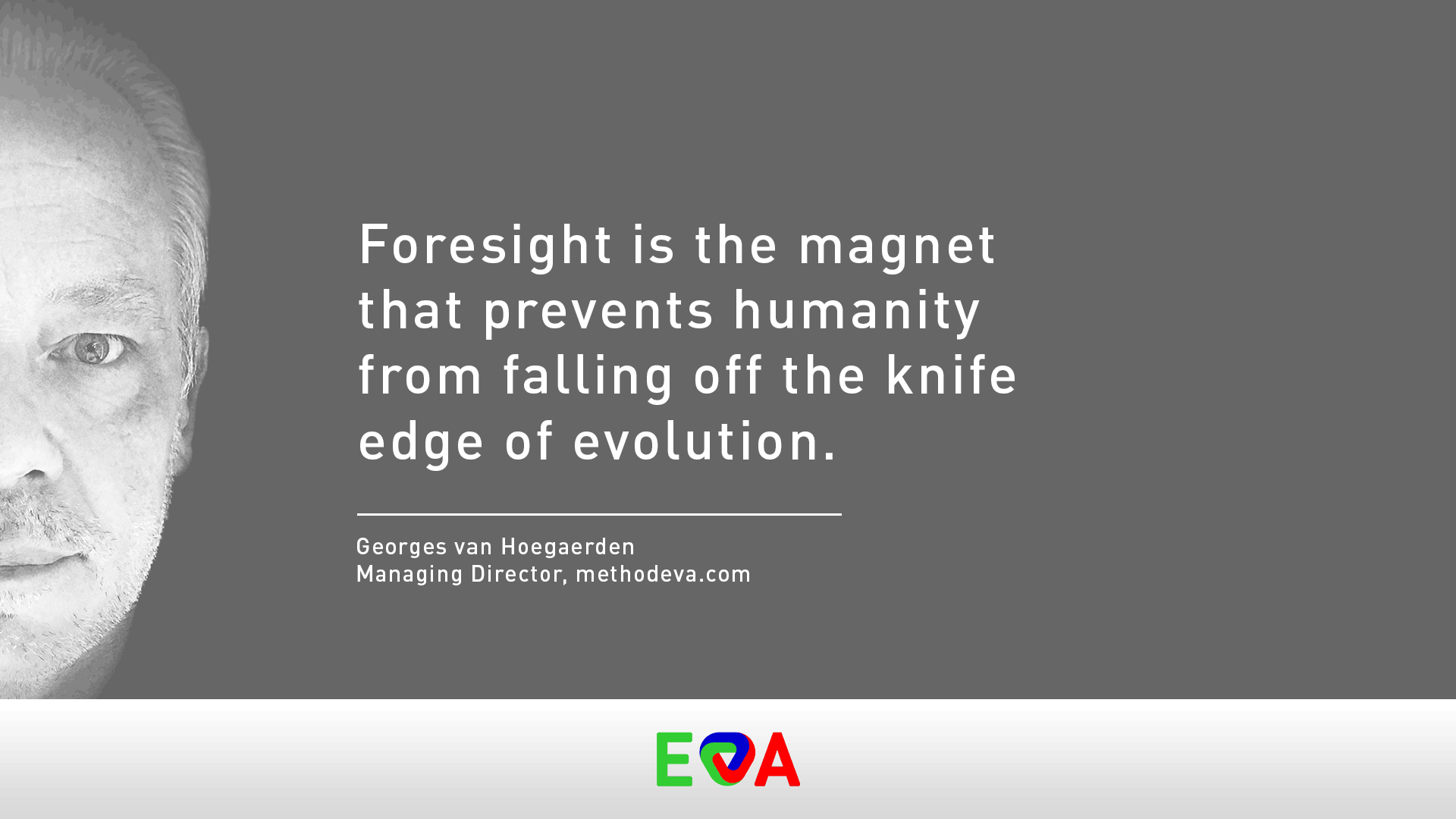 Why And How to Develop Foresight

Humans are equipped with remarkably well-developed brains we solipsistically ascribe belonging to the most advanced species on earth.

We are quite full of ourselves, because an insect species with a pin-sized brain, the bee, has already lived a thousand times longer on earth than humanoids, and is likely to outlive us by another thousand if we do not cause its extinction. It is time, therefore, for us to realize intelligence alone is not the trait determining the survivability of a species, but adaptability is. The composition of adaptability dependent on the development of an ecosystem of strengths and weaknesses.

Humanoid adaptability is dominated by our oversized brain capacity to compensate for the weakening state of our erect and wobbly frame, not helped by our growing, and dare I say degenerative, dependence on medicine for each of us to stay alive as long as possible.

Our capacity to reason, unknown to exist in any other animal species, helps us anticipate, prepare, and reestablish a dynamic equilibrium with nature. The foresight developed from our ability to establish theorems from reason helps us discover the rules of nature we will always be subjugated to improve the longevity of our species on earth.

Put differently; foresight is responsible for the expansion of the fractal of human ingenuity and capacity to offset against the steadily increasing threats and diminishing resources available to us.

Foresight is the magnet that prevents us from falling off the knife-edge of evolution.

The value and impact of innovation are dependent on new and higher normalizations of truth derived from foresight.

The cynical among us will rightfully question whether foresight exists at all.

For, in essence, what humans perceive as foresight is merely an improved comprehension of nature’s hindsight – a relativity of understanding best put in perspective by the notion that a house is considered to reside at a fixed address, even when the earth on which its resides moves. Moreover, our planet revolves around the sun, to add a few more layers of relativity, and our galaxy moves at the speed of light through the universe, and we now have scientifically strong evidence we are not even a grain of sand in a so-called multi-universe.

The theory of relativity itself, discovered by Albert Einstein, is based on a double whammy of hindsight. First, the evidence of bending light and the relativity of time is derived from the different observable positions of stars during a solar eclipse, and second, the light from those stars arrives a few billion light years after it was produced. Meaning, a glimpse at the night sky offers us insight only into nature’s deep hindsight.

Intrinsic to the meaning of (any form of) absolutism is its innate relativity.

Hence, the declaration of foresight described in this missive is defined by the expansion of the current state of knowable human truths, not by the non-sequitur of nature’s truths we have yet to uncover. To that point, one does not advance the use of relativity, at all, by stating the house you live in cannot be located because the earth is moving – if you catch my drift.

Religions of any kind, including over a hundred versions of manmade theologies, attempt to sell manmade hindsight as foresight to the unsuspecting greater-fool and instead stifles the recognition of new normalizations of truth that could advance humanity. Equally damaging to humanity are the many economic constructs humanity conjured up to manage itself, each in blatant violation of nature’s first-principles.

Not to single out the religions above, a more benevolent version of regurgitated manmade hindsight comes from the reliance on proximal development, a process identified by psychologists by which people learn slightly above their comprehension level from people around them who “tow the line.”

Proximal development can be an essential tool to gain followers for a new supposition of truth, but it does not guarantee said truth is derived from the exploration of nature’s hindsight. Joining the Jonestown sect, for example, led to proximal development of humanity in the wrong direction.

Ergo, proximal development too shall not be derived from manmade values, but instead, be correlated to the evolving proxy of nature’s truth. Pay therefore close attention to the people you follow, and what truths of nature they claim to endorse.

With the unrelenting discovery of nature’s hindsight as our guide, human foresight becomes the essential impetus for innovation.

A critical analysis of our manmade concoctions is the reason why the innovation needed to change the norm – upstream – cannot be produced by a pageantry of positivity relying on the foregone conclusions of existing norms – downstream. Nor can an arbitrage of innovation stuck in collusion, deal fragmentation, and the avoidance of upside risk yield the discovery of such groundbreaking innovation, except by accident.

The unprecedented norm of innovation, as I describe in the evolution of evolution, will completely rewire to whom it concerns and to whom have come before. Everything will change in our manmade world, and dramatically improve humanitarian efficacy, as a result of a closer and more accurate proxy of nature’s truths.

Everything will change, not by changing the players, but by improving the name of our humanitarian game that changes the monetary incentives responsible for inducing new alignment with nature’s evolutionary first-principles. Human foresight, as the improving proxy to nature’s hindsight, is the impetus to innovation responsible for the expanding fractal of human ingenuity and capacity.