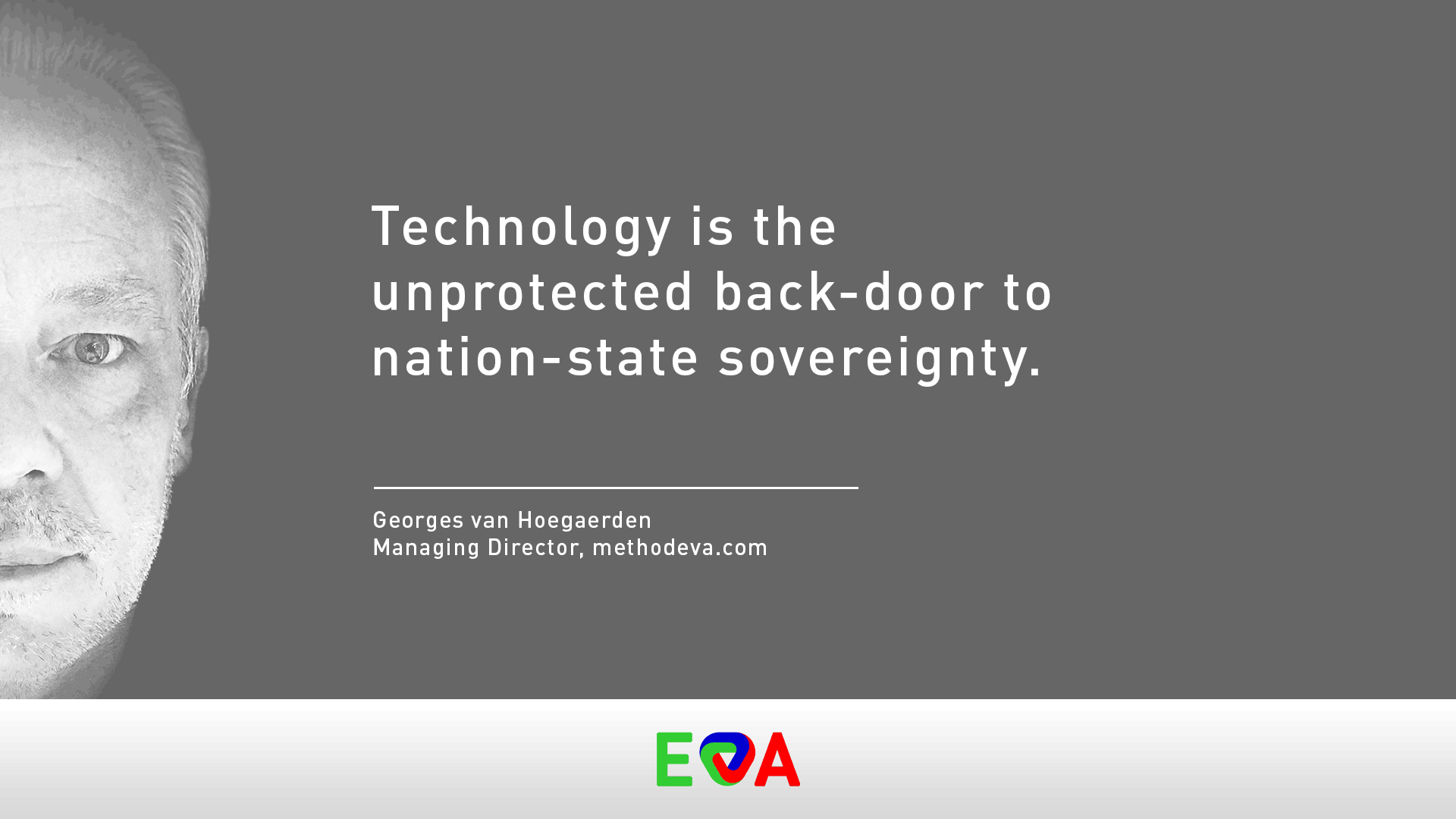 Tech: Govern Thyself Or Be Governed

I love technology and have since the age of fourteen. With some extraordinary responsibilities working in the technology industry for over 30 years since (including 17 in Silicon Valley), I was forced to become a realist. Large direct and indirect stakes were involved in my decision-making, and I have come to pay close attention to the role and impact of technology from both the buy-side and the sell-side of enterprise and consumer technology.

As I began to focus more on the economics of innovation ten years ago, I discovered how many technology systems, contrary to popular beliefs and the pageantry of false positivity, in actuality stifle evolution. To understand how, one must understand the confluence of evolution, economics, and technology. Very few of us do.

If we want to inspire the world we must lead the world by example, with new rigors of excellence we first and successfully apply to ourselves. — Georges van Hoegaerden

Let me not beat around the bush. Technology innovation has the new capacity to accelerate pretty much everything, including – unfortunately – our flaws. And boy, do we have some deficiencies in need of fixing.

Our economics, the rule book by which we compare and contrast human performance, is a highly flawed religion filled with voodoo science as its gospel. At the peak of its impetus, we preach to the world about the need for freedom without clearly understanding and defining what kind of freedom inspires us all. Like a rebel without a cause, we strong-arm the globe with our oligarchic absolutism of freedom (quite the opposite of free), shoehorned into the outdated models of governance, democracy, and capitalism we thought our two-hundred-year-old forefathers would have wanted us to deploy. Each is now hanging by a thread of renewable evolutionary impact. “How is this working for you?” I hear Oprah Winfrey whispering.

The Wind at the fore

Yes, I proudly call this country home. Not because it is perfect (no country is), but because it is a beautiful and powerful country that can reinvent itself. And reinvent ourselves we must. We must build better systems to perpetuate evolutionary value that inspires – not dictates – every person worldwide, beginning right here at home. The world is watching our every move.

Back to technology. All technologies employ a system embedded in the logic of their algorithm—a technology system we program to facilitate the freedom and the behavior of the people using it. For technology to spawn evolutionary value, it must deploy a system that supports the economic principles of liberty. Until now – not surprisingly – those technology systems have inherited the same misguided religion of economics as we deployed in the real world. And with the Internet as technology’s broad and immediate global distribution, the rest of the world has unbeknownst adopted our flawed economic principles at a much faster rate than in a pre-digital world, causing it to lose its unique identity of freedom rapidly.

You see, real freedom is a relativity theory. To achieve the benefits of freedom (like “free markets”), governments must establish paradoxical rules to protect collective freedom to allow the pursuit of individual freedom by its people to flourish. Not only does every country, by its laws and history, deploy its unique version of collective freedom, but every inhabitant also aspires to its unique version of personal freedom. Today we prescribe to the world a flat, uniform model of freedom. With a doctrine not unlike the Nazis attempted 75 years ago (albeit our ignorance has friendlier intentions). One that does not even pay renewable dividends to ourselves.

So, we must understand that freedom is only free when we appreciate what makes us different. We must realize that a -six thousand-year-old culture will not be inclined to bend to our two-hundred-and-thirty-nine-year-old versions filled with strife and has yet to prove its evolutionary value. We must begin to appreciate global differences by assigning value, respect, and trust to the economics that allow us to evolve as a species with many variations on a theme. Because only an appreciation of our differences, and real freedom, can spot evolution’s outliers with the propensity to change our world for the better.

Remember that not everyone can be an inventor, but an inventor can come from anywhere.

Back to technology again. For technology not to be merely a self-fulfilling prophecy and to support the evolution of humanity, it must at least adhere to the three most basic tenets of freedom.

Conformance to the first three tenets of Renewable Economics™ does not guarantee freedom. Still, I do not need to list more than three to prove most technology systems inadequate and flawed in their support of the evolution of humanity. And beyond Technology’s embedded economic fallacies with severe consequences, most technology companies deploy highly questionable moral values to make a buck.

Hundreds of examples around in the technology space. Let’s pick a few notable ones.

Facebook, now with 1.44 Billion active monthly subscribers worldwide as the most extensive consumer network, fails the first three tenets of freedom. Facebook ignores the rules of a country’s definition of collective freedom until it is eventually dragged into local courts. It violates personal freedom by establishing a difficult-to-comprehend (and thus opaque) oligarchic rule book forced upon every user, which changes from time to time without the user’s explicit consent. Facebook uses your trust and information in the network as a product for advertising schemes as accurate as the vortex of toe-nail fungus and erectile dysfunction ads on cable television, neither medical ailment I suffer from, I might add. Your “innocent” book of faces from a few years back to reconnect with friends has now morphed into an ingenious propaganda machine (as Noam Chomsky calls advertising) as if such corporate benevolence is the whole truth and nothing but the truth. Social media, the way technology deploys it today, is corporate-sponsored socialism at its finest.

Apple, now the largest technology company in the world, also fails the first three tenets of freedom. The price-fixing of digital media Apple deploys a harness of freedom that erodes the freedom of artists to stand out and sell their products however they want. Apple plays the hybrid role of a label and distributor where it pleases and favors specific digital media based on what it, not the audience, thinks yields value. U2 music, anyone? Under the watchful eye of a clueless Federal Trade Commission (FTC), Apple repeats the same tricks with books and other digital media. Add to that a lack of transparency with even more questionable morals, like changing the default storage of music and photographs to the cloud, so customers then incur additional storage and transmission fees. Buying an iPhone is the trojan horse that begins to reel in a fool.

AT&T violates the most rudimentary tenet of collective freedom by having been allowed by the Federal Communications Commission (FCC) to lock the SIM card it implants in its mobile phones and be restricted to work on AT&T networks only. Precisely the opposite of what the free-roaming design philosophy of GSM (the European-designed communication protocol) was meant to support. If the FCC had paid attention to sound economic principles we would now have a myriad of local GSM providers who, upon serving a better signal than AT&T in specific locales, would have had a chance to compete fairly on network coverage and would have supplied our country with more omnipresent cellular network reception and thus value to consumers. I can thank the incompetence of the FCC for why I now have spotty mobile network coverage near my home on Hilton Head Island.

ICANN, the Internet Corporation for Assigned Names and Numbers that registers internet addresses worldwide, has failed to acknowledge how people harm collective and personal freedom with no intention to start an internet business and scalp internet addresses and sell them for a significant profit to the highest bidder. Even the sports industry has figured out scalping hurts their bottom line and deploys rules to combat it. ICANN failed to align with local governments responsible for the proper adjudication of incorporation and thereby using a free-for-all ignorant of the need for the protection of freedom. The result is that most internet addresses are parked aimlessly, waiting to be resold at exorbitant prices, and inaccessible to those with legitimate purposes.

Despite opulent economic malpractice, we cannot entirely blame technology companies for the offensive schemes they deploy in pursuit of the mighty dollar. The absence of rules to protect collective freedom spawns the attrition of personal freedom we deserve.

The absence of rules to protect collective freedom created a tobacco industry selling loads of cigarettes to unsuspecting consumers, causing a significant increase in lung cancer. Three decades later, everyone else – including the next generation – is still paying for it. The absence of rules to protect collective freedom in the fast-food industry caused us to become the most obese “developed” country, with staggering medical costs that are just unsustainable. Similarly, the rampant and unchecked economics deployed by technology systems has and will cause further socioeconomic damage we may not be able to recover from.

What must become clear to us is that we can not sell our future short by ignoring today’s flawed economics. We must reinvent the old religion of economics that holds our spiraling evolutionary performance hostage. And technology systems, by their global reach and impact, would be the best place to begin demonstrating how we value each other.

Now is the time for technology companies to demonstrate that they are better off governing themselves and staving off any misguided governance that will otherwise undoubtedly come their way. Technology companies must set a new horizon, look up from their keyboards, understand the basic tenets of freedom, and out-innovate governance if they want to project authentic renewable value to the public.